Karla and I met about a year ago. I had just arrived in Amsterdam and had decided to sell some clothes with Mexican embroidery. She was my first client.

I remember that she came to my apartment with 3 packages of tortillas, I instantly loved her! And her tortillas even more so! 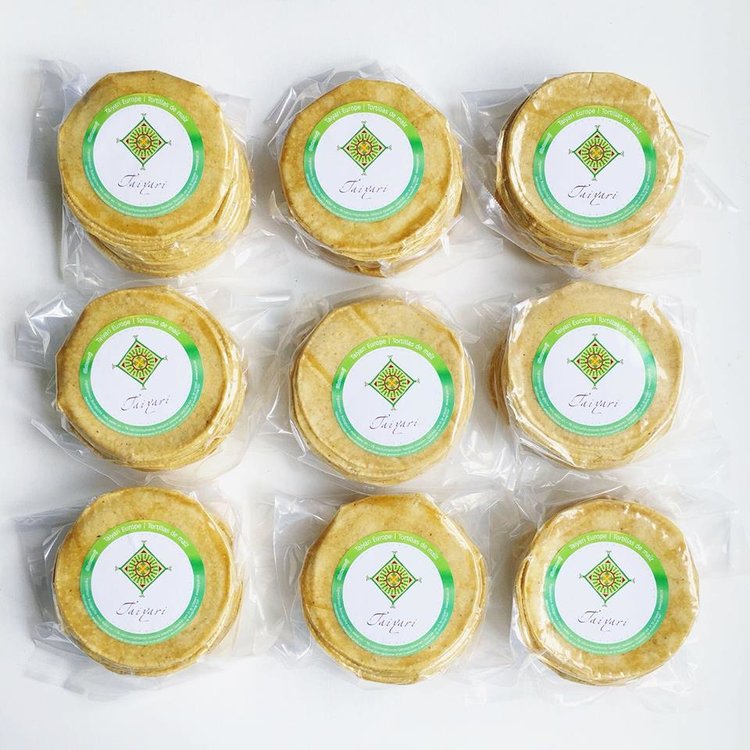 After a year of knowing each other, I decided to interview her for our section “After the steps of…”, where we share the path successful Mexicans living abroad have followed. Not only is Karla a very nice girl, but also she carries a very inspiring story with her.

For our “date” we decide to honor the place we live by transforming the typical Amsterdammer snack, the kibbeling, into tacos.

Karla is super friendly and she immediately makes you feel at ease and comfortable, so our conversation flowed while we prepared some Guacamole and a chipotle sauce with almond cream. So yummy!

Here’s a little bit of what she shared with us. 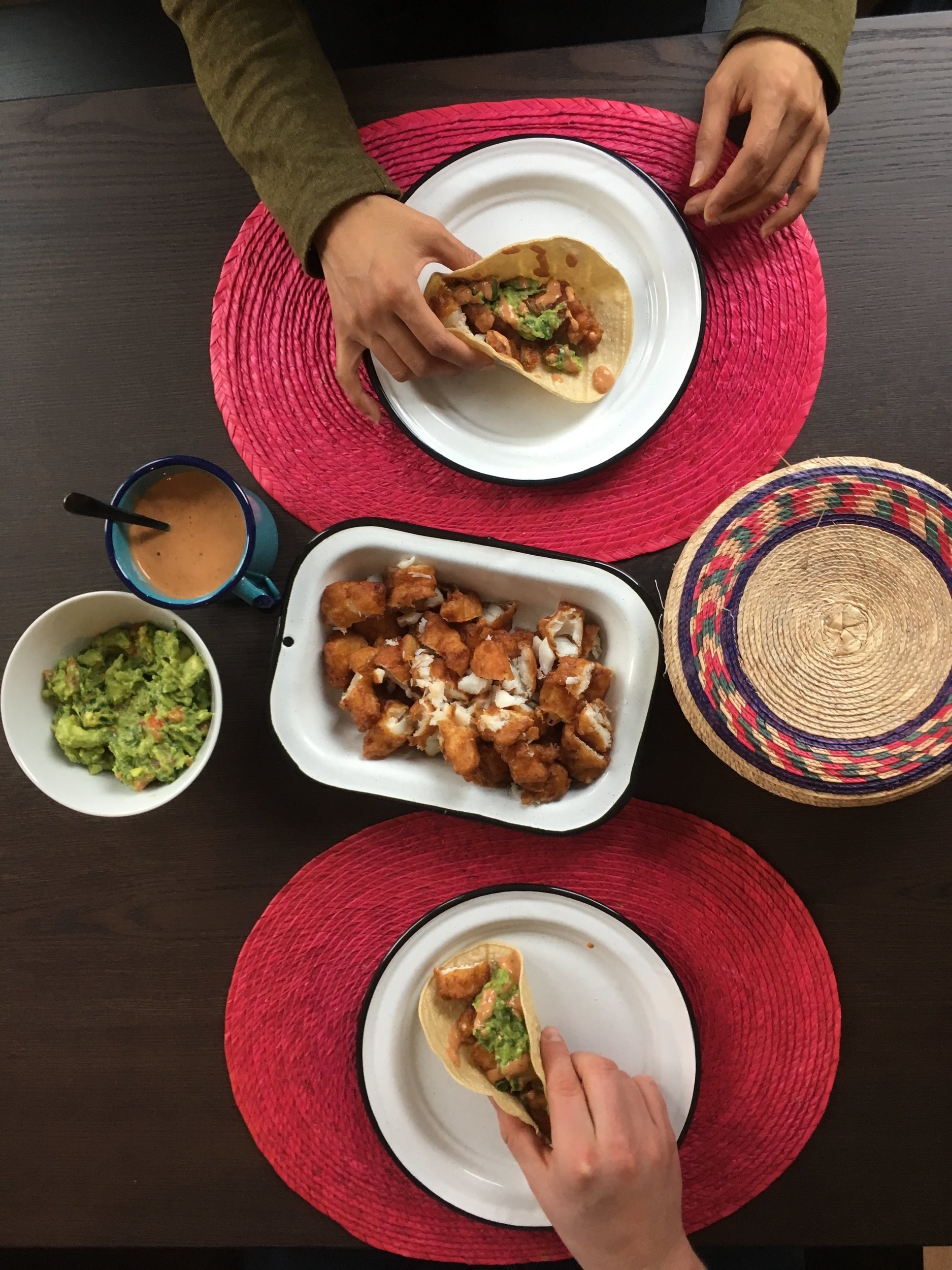 While they were dating back in Mexico, they fantasized about the idea of opening a taco stand in Amsterdam, and when they finally came to live in the Netherlands they decided to make their dream come true. However, finding a tortillas trader turned out to be harder than they thought. So, no tortillas, no tacos!

Shortly after they decided to open a tortilla factory instead.

Anyone who has ever starting a company knows that the was is not easy. So it was only normal that after every step they took, new obstacles arose. The first one? Financing the project, getting a loan from the bank to start their business was complicated. After several months of trying to get the money, they gave up. Fortunately, Karla’s mom helped them buy the equipment and they were finally able to import them into the Netherlands.

The equipment arrived from Mexico but then it took them a while to start producing tortillas. They first had to install the machines, import organic corn, learn how to nixtamalize corn and finally learn how to make tortillas.

In January 2016 Taiyari was born, the name came from the wixarica huichol tribe in Mexico and it means our essence/ from the heart.

Mexican food is popular abroad, so they started contacting all of the mexican restaurants in the area.

Little by little they started looking for clients in the Netherlands, Germany and Belgium. It was actually in Belgium, where in April of that same year, they found a guy with an online store that sold Mexican products and another guy with a taco place. Not only they became clients, but they also helped them to become popular in Belgium.

That same year they contacted “El Jalapeño Loco”, one of the winners of “My Pop Up Restaurant”, a televised competition among 7 teams with a different food concept each. The winner would get 100,000 EUR to open their own restaurants.

Their lucky strike came when they got an invitation to distribute their tortillas among the caters in the music festival Tomorrowland. Thanks to that opportunity they became the official traders for Belgian food trucks, restaurants and important chefs in the country. 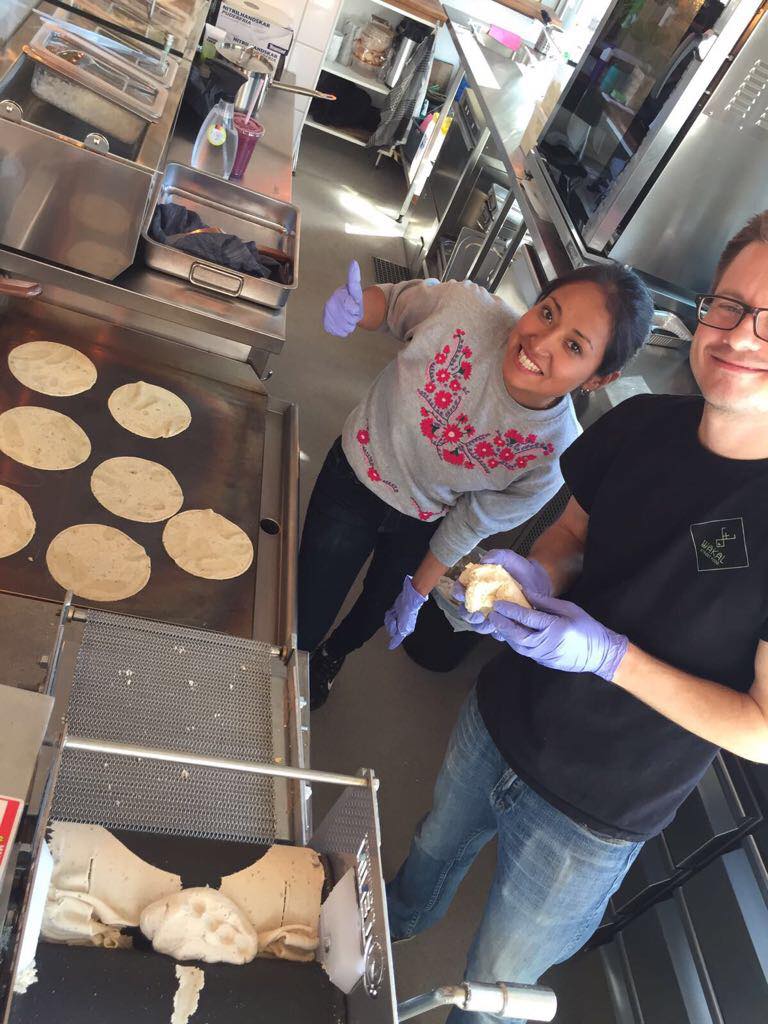 Even though they were quite big in Belgium, they could not leave behind The Netherlands, where they only distributed tortillas in a couple of restaurants : “Calle Ocho” and the newly opened “Mexico Boulevard. So by 2017 they decided to work harder to be well known amongst the locals. The started with a few hipster and vegan restaurants and slowly but surely they built up a reputation.

Thanks to the amazing quality of their tortillas, they were invited again to be the official tortilla retailer in Tomorrowland over the summer, and before the year ended they were featured in the financial newspaper NRC, the TV show RTL Z Niews.

On January 10th, they appeared in an episode of the tv show “BinnensteBuiten” with the french chef Alain Caron and the sweet AnaLu, owner and cook of “Mexico Boulevard” where they cooked a Tlayuda à la francaise.

With nostalgia Karla remembers how much they’ve grown, they started selling 10 kilos of tortillas per week and now they sell nothing less than 400 kilos per week! Becoming retail leaders in Belgium and The Netherlands.

The biggest obstacle she had to overcome was probably the language. If you’ve ever heard Dutch, you’ll know what I’m talking about. However, she had to learn to be able to communicate with providers, the technicians that give maintenance to the machines, chefs and restaurant owners when she delivers the tortillas.

She also confesses to us that believing in herself was hard, she struggled every time she had to speak to someone in Dutch, how hard it was to be interviewed, wanting to express a bunch of ideas but not being able to. Her will strength however, is inspiring; it’s admirable how she learned Dutch, and pulled off a Masters in Business all while starting her own company.

And since my friend never shows up empty handed, we finished our interview with a unique dessert: Cacao tortillas with chocolate and vanilla ice cream. Yes, it was as delicious as it sounds, I swear.

Being able to interview an entrepreneur like her makes me think about the following phrase by María Félix:  “I love my country and I’ve wanted to represent it with dignity worldwide.”

You are an amazing role model, Karla!

Get our best recipes & expert tips right into your inbox! 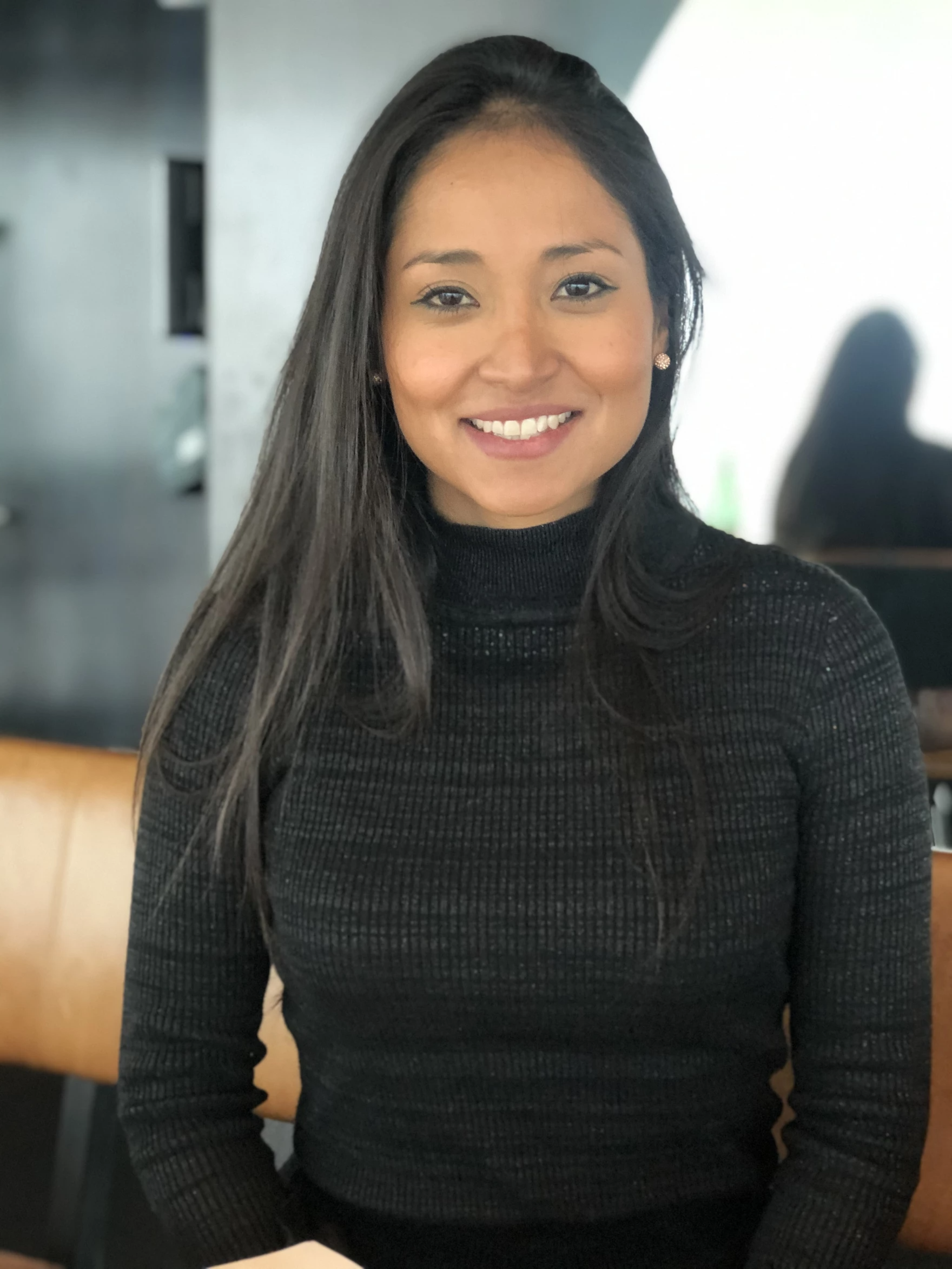 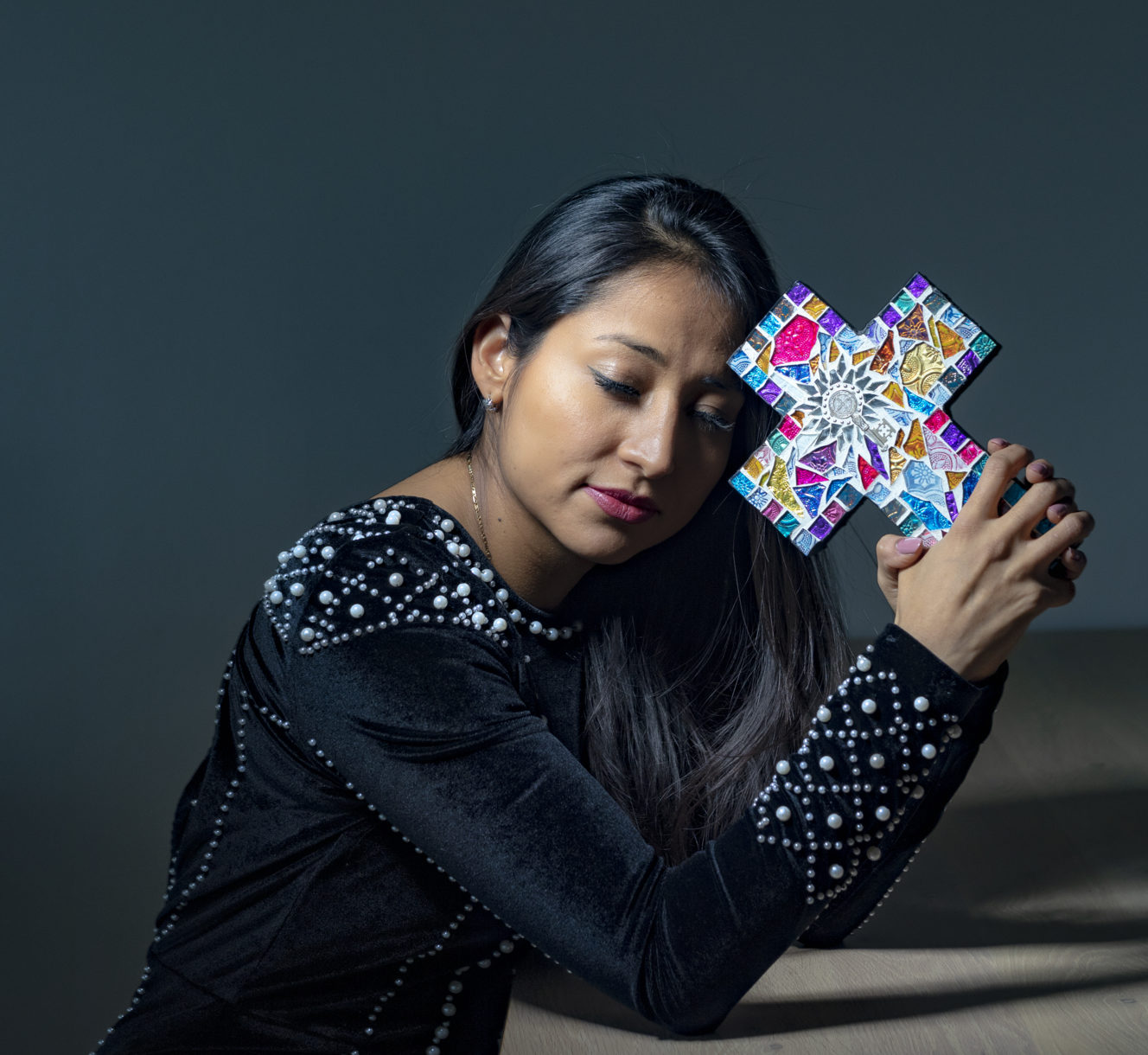 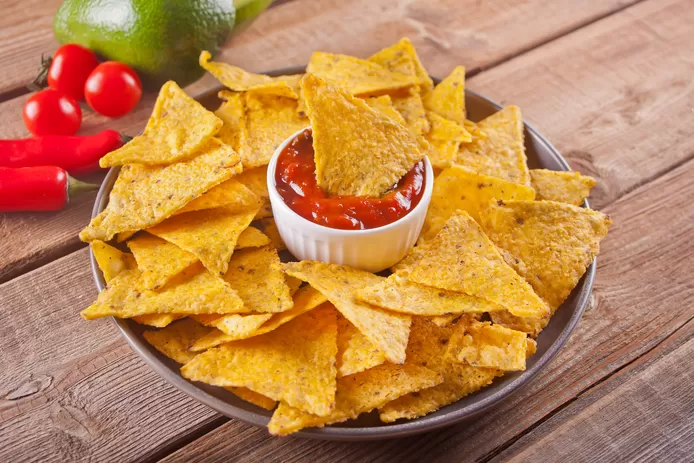 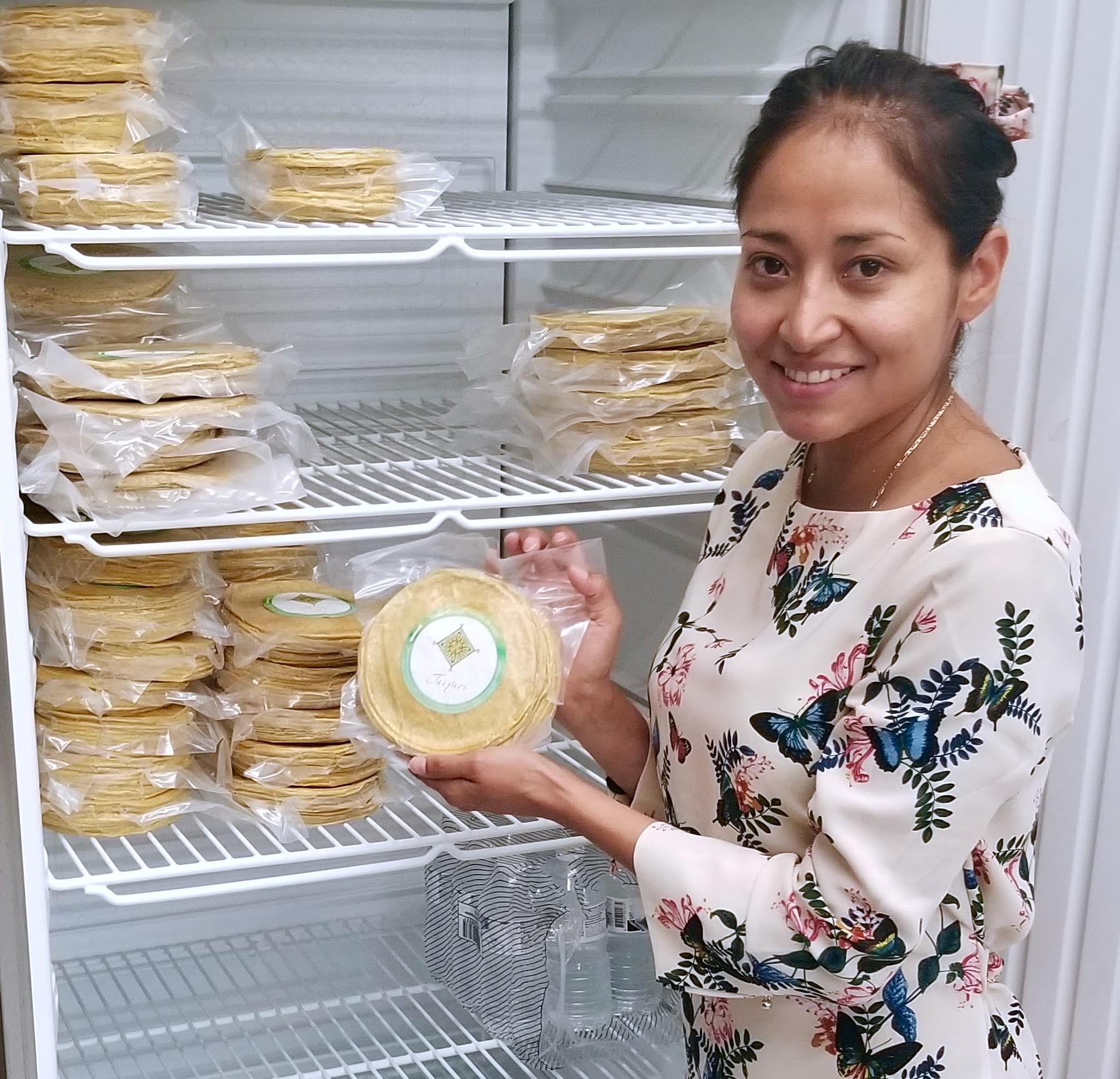 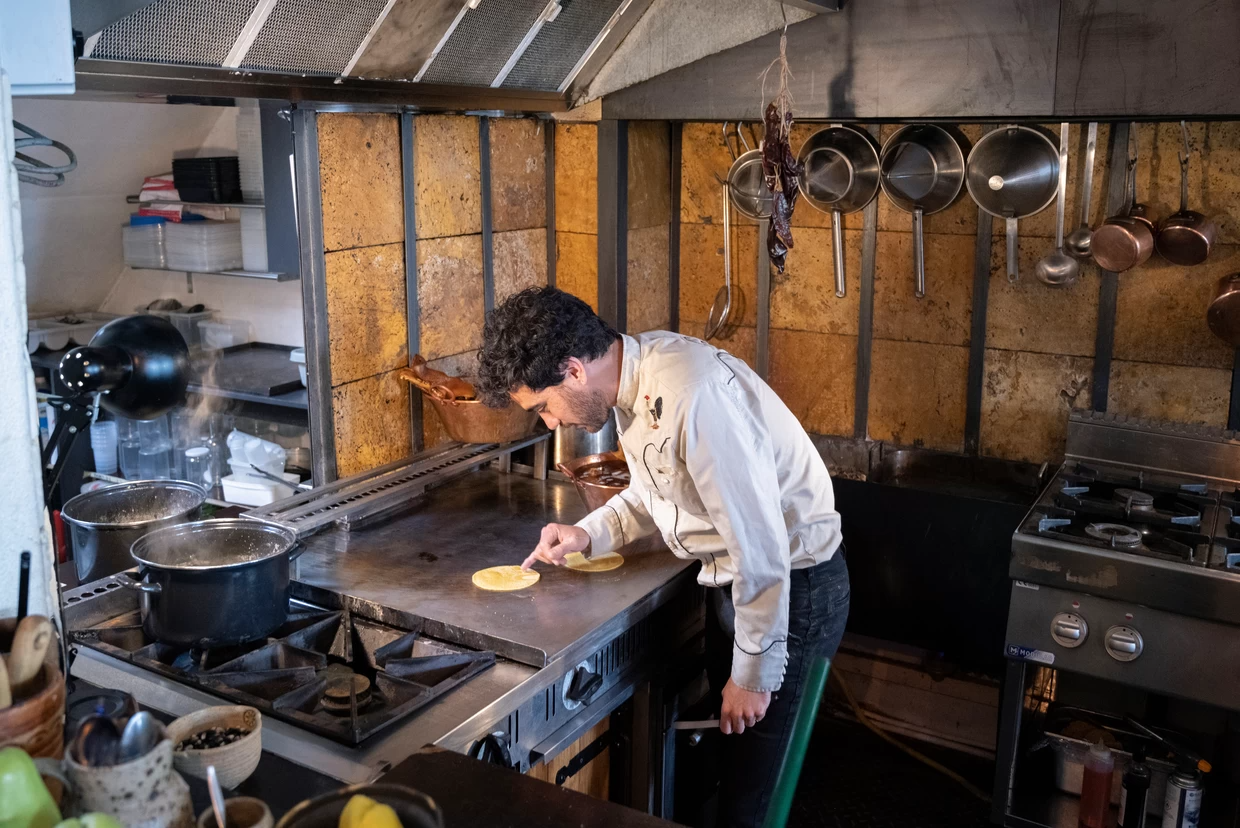 Sign up to be notified on new product arrivals, special offers & recipes.